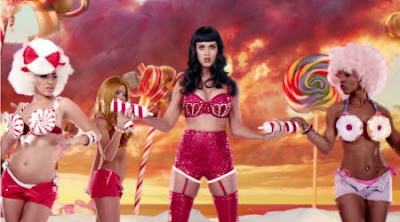 You know, over the years I've been listening to pop music it's seemed that the overall quality waxes and wanes. Right now, for instance (August 2010) we're not in one of our best periods. Now, it's certainly true that pop music has always been terrible for the most part, so this isn't anything new, but there have been brief periods where you could listen to even New York radio and think: hey, that's not too bad.

This isn't one of those times.

I'm going to pick on the Katie Perry single: "California Gurls" as an example of suckitude. We've got a straight-up verse, bridge, chorus - type tune here with a rap instead of an instrumental turn-around in the middle. That's fine. The verse is a funky staccato pointalistic section ("I... know a place..." etc.), then we go to the subject/answer of the bridge where the vocal melody becomes more legato ("you could travel the whole world") which is answered with a little autotuned "oh oh".

So far so good. But then... the chorus. OK, the melody which is a straight up, on the beat, subject and answer is fine: we have the subject ("California girls") followed by the answer ("daisy dukes"*) and then we repeat the subject ("sun-kissed skin") and what we expect is a big finish, an answer at the end of the chorus which will take us to... but all we get is a freakin' repeat of the answer at the end of the of the bridge.

It feels to me like a placeholder. Like they were thinking "OK, we'll put something good in here when we finish the song" but they never got around do it.

And unfortunately that laziness garnered a number one hit. So be prepared for more of it.
____
*Should "daisy dukes" be capitalized? Maybe. "Daisy Dukes". Still, a fashion about as ugly as the 70's had to offer. And the 70's had a lot of ugly clothes to offer, believe me. I was there. I lived through it.
at August 10, 2010