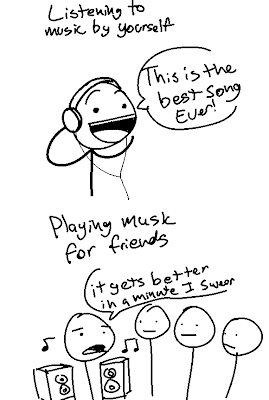 So we're having a long-running, meaningful, and friendly conversation about how we split revenues, expenses, that sort of thing. This was in my most recent email:

There's a part of me where I think "let's just split everything equally whether it's fair or not because that's just nice to do". The trick is to make sure there's no resentment built up from one person doing more/less and thinking he should make more/the others thinking they should make more, etc. And when it all comes down to it, naked dancers will be the only reason anyone would ever come. That, and the giant two-story tall muppet which attacks the bass player in the middle of Jabberwocky. The question is: who buys the vorpal sword?

Maybe one way to look at it is to look at the three possibilities of what might happen with T-mouse.

1. At the low end our maximum revenue for any one year is $57.38. This was because someone accidentally tipped Arie (thinking he was a waiter) at a bar we played in for free, and we made $17.38 in royalties because BMI mis-calculated a Swedish radio stations use of a similarly - named song which their program director misspelled. We spend our remaining years in retirement in Ethan's basement, smoking dope and drinking beer while learning the Gentle Giant oeuvre.

2. A heavyset man smoking a big cigar tells us we're going to be stars, hands us a check for a hundred thousand dollars and shortly thereafter we inexplicably replace Phish as the biggest touring act in North America. We hire people to take care of our Facebook page while in-between tours we sit in Ethan's basement, smoking dope and drinking beer while considering sending actors who look like us to play our songs on tour while we go to Aruba.

3. The more likely thing is that our revenue is at maximum one year some appallingly low number like $10,283, and out of that we have to take the expense of that damned Jabberwocky we built (which requires 5 operators). We can get a few hundred people to shows, but we end up having to drive to St. Paul to perform them. Facebook takes one of us 6 hours a day to answer all the fan mail from the people who confuse us with Lady Gaga. Everyone is mad at me because on the day I'm supposed to be answering Facebook mail, I get so frustrated with the interface I throw the computer out my window. We all wonder if it would be better to write commercials for Burger King or Exxon. Maybe if BP offered us $80,000 to play a benefit concert?...

The most important thing is that I get my own road crew. I don't want to have to turn on and off guitar pedals all by myself.
at August 12, 2010