It's all good times. New pickups in the EB0.

Conclusions? The position of 25.25" from the nut on a short-scale bass is the best "neck" position. Putting another pickup even closer to the bridge will get more of that midrange honk the kids love so much these days.
at November 30, 2016 No comments:

Email ThisBlogThis!Share to TwitterShare to FacebookShare to Pinterest
Labels: bass

I made a little rig. I swept a DiMarzio One pickup across the strings of an Epiphone EB0 bass. I learned things. 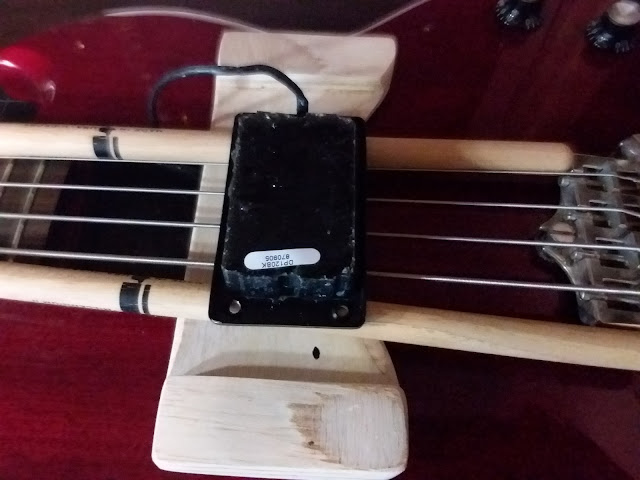 I learned mostly that Ethan was right about the pickup location.

Email ThisBlogThis!Share to TwitterShare to FacebookShare to Pinterest
Labels: bass

Following is an email (between the "§§§'s") with Ethan regarding the positioning of pickups on short-scale basses.

§§§
Well, I did some thinking and I did some measuring.  Many people feel that the "sweet spot" for a 34" scale bass is where a standard P-bass pickup resides, which is 28.6" (or close enough) from the nut.

First I did some measuring to see if all my P-basses were the same, and they were.  Then I measured some other, non-fender basses to see where they put their neck pickups and, sure enough, they were pretty damn close to 28.6" - G&L, Modulus, Kawai, all 28.6".  One exception was Musicman, who puts the neck pickup on the Sabre closer to the neck, but I never cared much for the neck pickup sound on a Sabre, which leads me to believe that this 28.6" may be something like a right answer.

As it happens, the original, single-coil P-bass places the pickup an inch closer to the neck.  It sounds good there, but it's a very bright sounding single-coil - very UNlike a split P.  Did Leo Fender move it closer to the bridge when he switched to the split P humbucker to reduce the muddiness of the newer, quieter pickup?  Yeah...  probably.  Did he come up with the new measurement scientifically?  Almost definitely not.  Did he just get lucky?  I doubt it.  I'll bet he just tried it in a bunch of places and chose whichever he liked best.

Incidentally, 25.25" happens to be exactly where the pickup is on my vintage Dan Armstrong/Danelectro, which is the only short-scale (30") bass I own, and it sounds really good there.  There's a bass with the same scale as yours and the pickup is placed right where an equivalently-scaled P-bass' pickup would be.  That's a "lipstick-tube" pickup on there, which is an overwound single-coil that sounds like the bastard child of a split P-bass pickup and a P-90.

So in your position, I would probably choose 25.25" from the nut (to the center of the pickup) if I were using a humbucker of any kind (including a split P), 24.9" for a J pickup or any other bass pickup with a bit more clarity (like the newer, full-range Bartolinis, Nordstrand singles, Delanos or lower-output EMGs) and leave the 24.25" position alone, as it's probably not far enough from where your pickup is now to make any substantial difference.

As far as a bridge pickup goes, Gibson tended to put them too close to the bridge.  I guess they thought they'd only be used as an addition to the neck pickup.  I'd suggest putting it right between the other pickup and the bridge or maybe even a little closer to the other pickup.  There will be less difference between the two pickups, true, but there will still be a difference and what you'll gain is two, distinct sounds that can both be used as stand-alone bass sounds - something you really can't do with a stock Gibson bridge pickup.

Now, just to muddy the waters a little further (because I can), the Musicman Stingray only has one pickup - ostensibly a "bridge" pickup, although it's far enough from the bridge to still sound like a [neck] pickup.  It sits at 30.6", which equates to 27" on a 30"-scale bass.  A Rickenbacker's neck pickup is really close to the neck and most people use the bridge pickup as the main pickup on a Ric.  Translated to 30" scale from a Ric's 33" the pickup would sit at 26.8".  In other words, if the scales were equal, a Ric's bridge pickup sits VERY near where a Stingray's pickup is, which explains their similar growl.

Based on these numbers, I'd shoot for 25.25 for the neck pickup and then try to squeeze the bridge pickup in there as close to 27" as space will allow (reality would probably push you closer to 27.5).  Sure, it will put it pretty close to the neck pickup, but you'll end up with two really useful pickup positions that would still probably work well together, too.

As far as what pickups to use....  well, shit.  There are an awful lot of options out there.  It really depends upon what you're after.  Do you want your bass to still sound kinda like an EB-0 but on steroids, or are you looking for much more versatility?  There's a pretty staggering array of pickup and electronics options for bass - everything from pure thud to super hi-fi with tons of stops in between, and a lot of ways to get both - or, at least, aspects of both from the same instrument.  A lot of it is just how much planning you want to do and how much you want to spend.

There I go, thinking too much again.
§§§
Here for your dining and dancing pleasure is the schematic for wiring a Jazz Bass.

Email ThisBlogThis!Share to TwitterShare to FacebookShare to Pinterest
Labels: bass, Conversations with Ethan

Obviously Native Instruments has the sampler world tied up with their Kontakt engine (which is awfully pricey IMHO). And the registration system -- let's just say it's not the best. Some of the official NI instruments I've bought from them work, and some will "say" they're registered but still only be in demo mode which only gives one 15 minutes to work with them.
There are, ostensibly, other options. Plogue makes a free thing called "Sforzando".
As for free libraries there's the Virtual Playing Orchestra and Plogue's own free sounds. 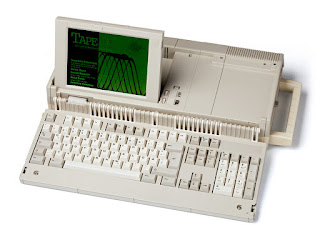 
The order of events is thusly:

An interesting discussion over on Reddit about exotic dihemitonic pentatonic modes. Ethiopian jazz musician Mulatu Astatke does some very groovy stuff in that, er, mode. 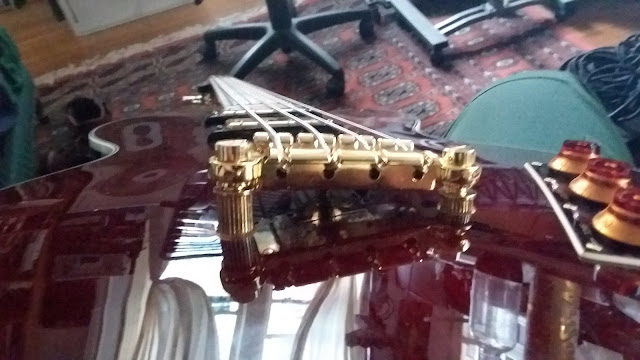 A while back I'd bought a used Allen Woody bass from Guitar Center online. Unfortunately, this was a thing that was true about that bass. Fortunately, Guitar Center lets you return used purchases to any GC store. So I did. And then I bought a new Allen Woody from Sweetwater and never looked back.
at November 03, 2016 No comments: