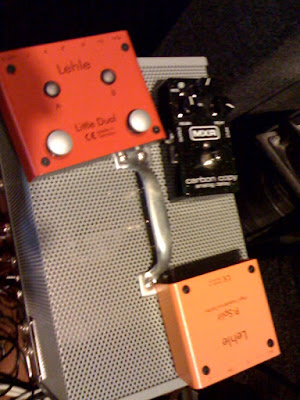 I've been in a number of bands over the years and in most of those bands I've been the primary writer. Or the only writer.

Now, with Tyrannosaurus Mouse I'm certainly the one who originally came in with all the song "germs" (and a couple finished songs). But several of our ideas were born out of rehearsal.

But you know what? I feel that's oppressive. To me.

So what I've suggested to the guys is that we split the writing credit between all of us equally, I'll take the publishing side of it and retain control of the rights (just so I can submit the whole dang thing to Pump Audio and what-have-you). At first they thought that was unfair to me, and I understand that intellectually. Then it was suggested that we flip that arrangement, which also has a great deal of merit -- we split the publishing and I retain the writing side (this would actually make the administration of the music simpler). But then their names wouldn't be on it.

But for me that's not the point. I want the pressure of being the only writer removed from hanging over my head. I want the freedom of coming in and just jamming, noodling, what-have-you, with a group of fantastic people and whatever we come up with can become a song or piece of music and the collaboration (which to me is the fun part) never becomes: "Who wrote that bass line? That drum part -- does it seem like the sort of thing which merits a writing credit? You're just playing a simple blues part on the guitar, that's not really "writing". Etc., etc.
"

We just make some music. Whatever we make, we make. We laugh before and after the song. And then we go get waffles.

What more is a band for?

_____
Right now this is the entirety of my guitar pedalboard. Maybe I should get one more MXR Analog Delay for leads. Right?
at August 11, 2010