Faith. And a new faith.

My faith is still crisis-y regarding preamps.

Maybe the whole theory that the accumulation of subtleties in multitrack recordings is what makes the very small differences in preamps important is actually correct.

I'm tempted to test this in a way that has one scientific flaw. But just you watch. I'm gonna do it anyway.

If you run a microphone into more than one preamp at the same time, you're loading down that microphone and it doesn't behave the way it ought to. So that's why preamp tests on the Interwebs are always one microphone:one preamp.
But uh. Modern preamps are made to bridge. And when one actually runs the numbers, the loss and weirdness of running a normal modern microphone into multiple preamps actually ain't that much. So I am going with the notion that one can record to more than one preamp simultaneously. There is a science-loss here because there is a mathematical difference. But it's worth trying because until we get robots who will exactly replicate all moves on all instruments, it's all we've got.* 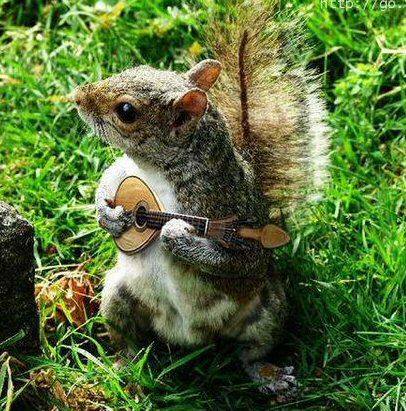 1. Install and register Samplitude, Sibelius, and the most recent version of ReWire (the one that comes on the Sibelius CD is fine)
2. Start up Sibelius on its own, go to the Play > Playback Devices dialog, select Audio Engine Options and, if the "Repair" button in the resulting dialog is enabled, click it [Drew's note: I believe this option has been moved to another place in the latest version of Sibelius.]
3. Shut down Sibelius
4. Start up Samplitude
5. On the VST/DirectX/ReWire page of the Options > System dialog (which is inside the Effects group of pages), tick the box that says "Activate ReWire"
6. Restart Samplitude
7. Open a Samplitude project, and create/select a MIDI track
8. With the MIDI track selected, go to the MIDI panel (by default this is on the left of the screen, under the Track Editor); from the "Out:" drop-down menu, select New Instrument > Rewire > Sibelius
7. Sibelius should now start up (and Samplitude will give a warning message if you're not using ASIO)
8. Open your desired score; if you're using Sibelius Sounds Essentials you'll probably want to leave it a while for Sibelius to load all the required sounds. Now starting playback in Samplitude should also start it in Sibelius.
9. If you want to record Sibelius' output onto a track in Samplitude, choose a stereo Audio track, and, in the "In:" drop-down on the Audio panel, choose Instrument Outputs > Sibelius Mix-L Mix-R

Rightmark makes audio testing hardware which is interesting, and there's a free version.
Izotope RX for post. Way not free. 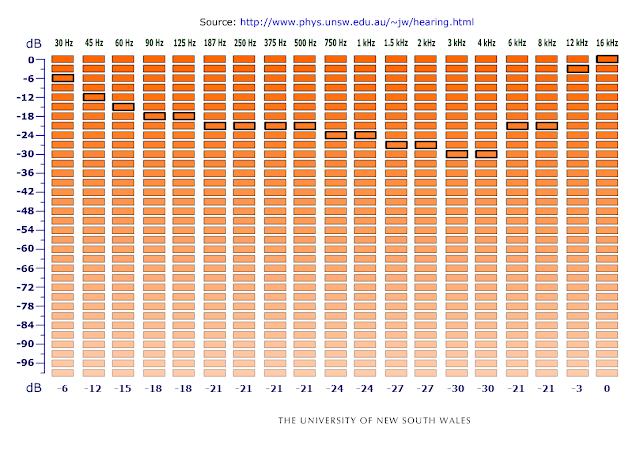 
§
I am super irritated with  2.6 (or so) kHz. All my life the harshness of parallel walls or sopranos or something in this region has really bothered me. And other than notching it with a multiband compressor I just don't know what to do. Sometimes I think "Egads! Is that sound really happening in the space?" And... it is. Ugh.
I don't know why it takes me so many years to finally "get" what's bothering me. I have a specific memory of hearing a soprano sing at the little barn-theater at my high school and being bugged by it. I remember touring with the Wooster Group and being irritated by it once the volume got too loud. We could pull frequencies out, but it would get too muffled. Of course at the time all we had were sloppy Klark Teknik 31-band graphic eq's. So you could make the sound right when it was loud, but then when you got quiet again the sound was very muffled. It sorta sucked. A narrow-band de-esser might have worked but I don't know if there were any commercially available ones which went down that low (this was the early 90's.)
Anyway, I want some nice corrective eq's or something in the way of a phase-coherent hand-limited and frequency-variable compressor (without makeup gain.)
For classical music I'm really digging the preamps in the Zoom F8. I know, an unpopular opinion. But they're really great. There's just no inserts or EQ's available.
The new version of the F8 let's you record to your computer and to the SD cards simultaneously.
I would b interested in knowing what the preamps on (say) a Midas M32r sound like.

Or: grousing for fun and profit.

The stereotype of sound guys is that they're lazy jerks. Just because that's true doesn't make it so, of course. But yeah.
One problem is the sheer amount of religion in sound. It's virtually impossible to do a real A/B comparison that's double-blind. But it can be done.
Firstwise is the infamous Sound On Sound preamp test where they could really do a double-blind listen to the same source. Remember this one? It's the one that showed that the cheap $300 ART tube mic preamp and the cheaper Mackie VLZ preamps to beat out Neve, API, and SSL. Yeah. That one.

Over at JWSound a poor user dared to test the Rode NT5 against the Schoeps MK41. Foolish mortal, he. (And don't get me started on how the nominal competence level of the production sound mixer is so far below average studio intern as to simply be embarrassing. I mean, they as a group have zero clue about what they're doing and the kind of audio they/we do is very simple. Not always easy, but always simple.)

And then there are these blind preamp tests.


You know something's up when the fear of a double-blind study is so great that people try to deliberately skunk the results.  Remember Ian Shepherd's test of humans vs LANDR and Aria machines?  (I know, it wasn't his test but he did work on it and I can't find any links to it now.) Well it turns out the "blind" listeners were super-affected by comments other people made. So the differences between man and machine weren't really all that significant (although they were there... we think.) 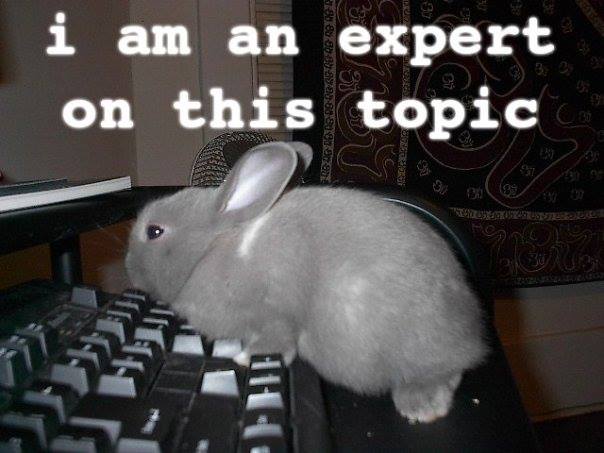 I have a notion that much of the actual differences in audio gear is that equipment has become on average vastly better than it used to be. A/D converters, for instance, are much better now than they used to be and that's true of mic preamps and analog signal paths as well as microphones themselves. I do have a great deal of difficulty caring about the difference between a U87 and a Rode NT1. I just... I don't care. An EQ will do whatever it is you need to an NT1 to make it a U87.
There's still differences between microphone types. So big-diaphragm multipattern mics have that big dry sound I like so much in live sound reinforcement (warning, danger, that is a radical opinion in and of itself, nobody else uses them that way.) And small diaphragm condensers will tend to sound the way they sound (very broadly speaking, I hate the off-axis nonsense of most all small-diaphragm other than Schoeps or Oktava, but I challenge you to distinguish in a recording which is which.)

So I'm more than willing to admit that I'm going insane. I just need to put that out there, up-front and so on.
But I'm having a crisis of faith in preamps.

I have a pair of Neve 1272's (modified by Brent Averill.) I liked them better than the old 1073 I had (I know, let's just list this as apostasy #1). But although I've gotten some great guitar sounds with them, I've really started to prefer the Lindell preamps. So, I figure, maybe as I've gotten older I've been feeling more API than Neve. That's fine.

So the other night I was recording Russian Chamber Chorus with my Zoom F8 and I figured I would use Lindell preamps. Because, you know, more better, right? 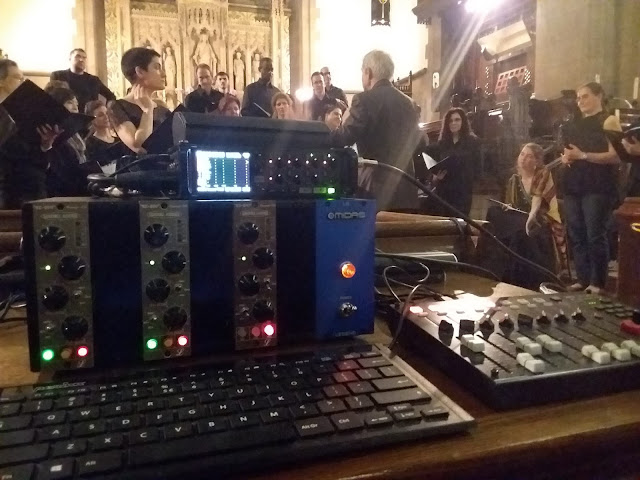 No. No, not at all. There at the time I hated the sound of the Lindells on this ensemble. Hated.
Let's review. I have a custom ribbon microphone in the air above the conductor, and a pair of spaced Oktava 012's with hypercardioid capsules in the sweet spot in the audience where we get a "bloom" of the sound.
Now while I was recording it was immediately and imminently obvious that the Lindells were not as detailed and nice for this material. Counter-intuitively, however, when I got home I couldn't tell the difference between the Lindells and the internal preamps on the F8.
Which is odd because you'd expect that differences would be more apparent listening on Sennheiser HD 600's or my Blue Sky system. So why how what wut? How could something be so obvious in the field but not under more controlled conditions?
Well, on location I'm using lower impedance headphones -- Sennheiser HD 280's. And the F8 does not have the world's best headphone amp. So at first I thought that maybe the TRS line inputs took a different path for monitoring off the F8. That doesn't seem to be the case. Maybe it's because of the phase relationship between the line inputs and the mic inputs and the actual sound which was bleeding into my headphones from the actual singers?
I have no idea.
But in either case, the F8's preamps are very tres excellent for classical music. Does this mean I should just get rid of the Lindells?
Well, maybe not. Maybe for rock and roll the API-like sound of the Lindells is better. What I noticed was there was less "air" and less detail. But for a fat blues guitar, that might be just the ticket. I don't know.
I do know, however, that the Neve's which I'm not using probably need to go to someone who will love and make records with them. Because I'm not.
So today I recorded RCCNY with a pair of ART Pro MPA II tube preamps. In the field I could not tell the difference between the ART's and the internal preamps to the F8. So I figured "At first, do no harm" and recorded the concert with the ART's.
Listening back to the rehearsals where I was switching between the ART's and the internals can I hear a difference? Uh. Maybe? It's not a big one. And it's certainly under the threshold of placebo effect. So I'm not super into lugging the ART around.
For classical music it seems that the internal preamps to the F8 are more than fine.