Don't Tell the Other Guys

But man, my left hand was achy after playing only a couple hours last night. And we're going to have a good few hours of playing in the studio on Sunday.
It's a bit humbling how those guys can play for such a long time. I think that about 25 years ago I had the hand strength to do barre chords for hours on end too. Not so much anymore. I'm in a lot better shape than when we first started Tyrannosaurus Mouse over a year ago, but uh... yeah, I could be better.
Plainly, I need to practice more just to keep up.
That being said -- I think I've discovered a secret. Well, I've re-discovered a re-secret which I have to keep discovering.
That is to play less.
Back in the 1980's I was playing in a folk group and on this one gig (I think it was a benefit to save the Raritan river or some such) my guitar strap had snapped off so (since I was standing) I had to hold the acoustic guitar awkwardly.
I had a solo in one of the songs we did and afterward the singer told me it was the best solo I'd ever done for that particular song.
Of course, to me the solo had sucked because I could only just barely play anything. But I realized (and didn't really internalize) that it was because I'd just been forced to play fewer damn notes.
And the same thing is true with Tyrannosaurus Mouse.
Fewer notes.
The ancillary lesson is: less distortion = better sound. But that's for another time. Still: fewer notes. 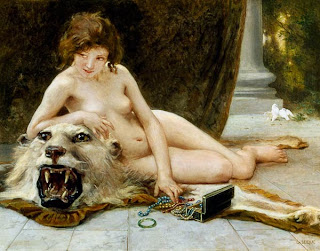