So, here is my personal post-mortem of the first Tyrannosaurus Mouse concert.

My biggest worry about this show was that I wouldn't have fun. This has been a problem for me in the past -- where I've been so stressed out that I'm just trying to hold it together for the duration of the set and all I want to do is get it over with. If that had happened it would have sucked.
I have a memory of playing with Pavlov and the Drooling Dogs in Stanhope, New Jersey in 1985? '86? .. or wait. Maybe not. Wasn't there a venue up in Dover or somewhere? It was a huge place. Anyway, I remember playing there once and thinking "I spend all month gearing up for how awesome this is to play live, and now that I'm here I'm miserable just hoping the band won't fall apart. I'm going to enjoy myself instead." It worked and I enjoyed the rest of the set.

So that's what I did with T-mouse too. By the time we went up to play I was done with stressing over the sound system and the projections and whether we'd get stills taken and if the lights would dip down properly, and just enjoy myself. So that's the number one thing. I had a good time. Other than that, here are my thoughts: 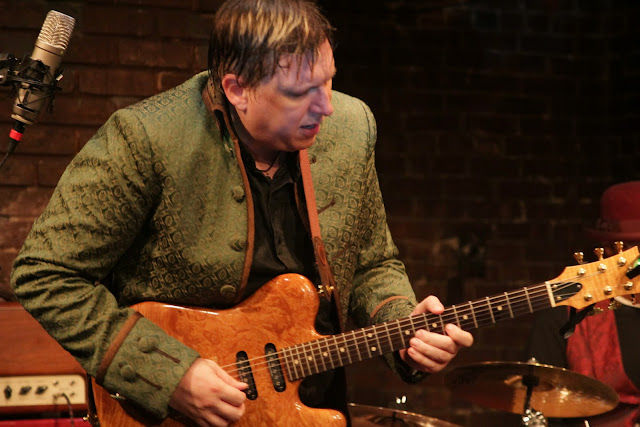 1. Costumes worked great
Everyone, even the initially resistant band, agrees on that. They look great.
2. Guitar volume is hard to control
I've gotten myself set up such that my guitars are very responsive. Which means that the volume controls on the guitars do a lot. But setting the volumes can be very tricky because just a little bit of turning goes a long way. And it can be incredibly difficult to see exactly where the volume is turned to, so you basically have to play and listen. In a live situation that can be difficult. I almost wish the volume controls were stepping potentiometers (which would make volume swells impossible but that's just how things are). Anyway, that's something I have to figure out.
3. The video projector is mighty dim
This might be because the lamp is going. And/or it may be that we had the stage lights up for shooting video. In any case it would be nice to have a projector which could put out a whole lot of light as well as spread it over a short distance. That sounds like it'll cost money. We don't have money. So it'll have to wait.
4. It's hard to keep the volume under about 80dB SPL
The guitar amps, as you can even see from the picture above, are turned way down (the volumes are the last two knobs on the right). And the guitars really start to sing when they're up just a bit louder.
5. Why hasn't Ethan been playing electric stand-up bass all this time?
It sounds awesome. Infinite sustain. Plus as an added bonus Ethan plays fretless with a lot of taste (which is unusual for a bass player. ;-)
6. The keyboards are a good situation with the laptops
We're using laptops to generate the sounds (electric piano and Hammond). Look down below somewhere for the formulae. They sound fantastic. We might look into getting something other than a bass amp for the keyboards though.
I don't know what's going to happen with volume control. Right now Arie is using one volume pedal. Will he use two? Who knows?
7. I need a guitar stand.
I managed to knock over the Les Paul during the first song because it was leaning against my guitar cabinet. Not my best moment. Right up until we were about to play I was going to play the entire show on my Blattocaster but then Greg Bartus said "You're not going to play your Les Paul?" and so I had to have the Les Paul there too. But to switch guitars I will ultimately need a guitar stand. And, let's face it, a guitar tech too. Gimme one.
at September 30, 2011