Looming Productions in Greenpoint is a very nice rehearsal studio. Inexpensive, too (which in New York is a real rarity).
The gear is in good shape. And if you're good with the G train, it's fairly easy to get to.
The funny thing about the space is that you go up an steel staircase to the second floor and then you step outside onto the fire escape and then come back into the building. So that part is amusing.
But in studio C they had a very tasty Vox amp and a Tama drum kit that was in fairly good shape. I don't really know or care what the bass amp was because after all, who cares about bass amps?
+++++
The audio embedded below is from a rehearsal almost a year ago at Complete Music. This is clearly something we need to develop. I think it might be cool if it were under the first dialog interaction between Holden and Leon in The Imaginary Opera. Ha!
So last night we were experimenting with some stuff and I thought I'd do some of the spoken lines from The Imaginary Opera while we were playing. You know, it's the whole bit with "there's a tortoise lying on its back..." And I discovered why the guys in T-Mouse dislike The Imaginary Opera idea so much.
Ethan said "It's like bad beat poetry."
And it struck me. None of them have any clue what it's about. 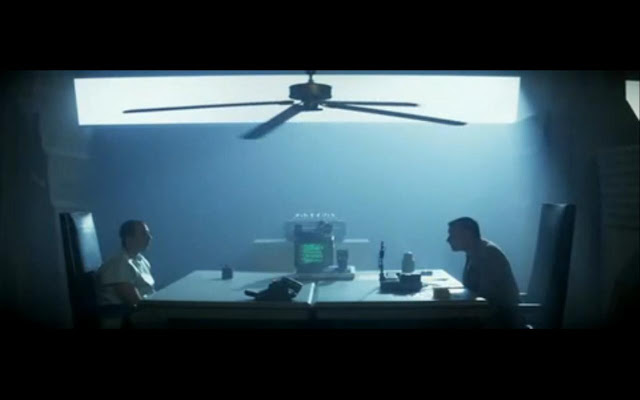 Now I've actually gone and changed some of the dialog in The Imaginary Opera a little bit so it's more like Stars, My Destination so the references in it are even more obscure.
This is not helping my case.
I suppose it shouldn't surprise me that there are people in the world who don't have Blade Runner and Apocalypse Now all but memorized. Those people exist. Apparently they're all in Tyrannosaurus Mouse.
I think I might ask Maduka to do some of the spoken word parts and we'll put them on an iPod and do some in-rehearsal playback. But still if you don't get the reference and you don't get what the scene means, it might just all whoosh by you. Right? Who knows?
How much time do I have?
at October 20, 2012