In the Box II

Live mixing "in the box" can be incredibly dangerous. You can get yourself in a whole bunch of trouble in no time at all. Of course, when those single-channel-interface consoles first came out, everyone was afraid of them too. And facing reality, you can get yourself into trouble on any kind of console if you don't have your gain structure well thought through in your mind.
In some ways, having just one channel to look at can be better (ergonomically) than 56 channels of nonstop fun. 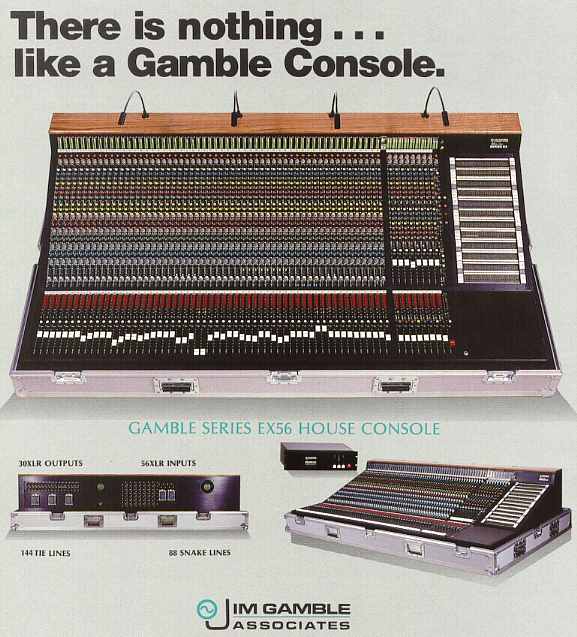 But I'm kind of fascinated by the fact that you can have a fairly massive "console" in a computer with a couple interfaces. Do you want a Harrison mixer? You can have one for $150. And the thing will run on Linux for crying out loud.
The Gamble EX56 was kind of the Rolls Royce of analog mixers back in the day. It pretty well does everything you want to do in a live sound console. There are 8 stereo aux sends, but if I recall correctly you can only select one subgroup on a given channel.
On the planet I live on, outputs are frequently needed as much as inputs. Starting in theater, and then even more in broadcast, one finds oneself needing to send inputs to multiple outputs.
The interesting thing is that most audio interfaces have about the same number of outputs as inputs. So if you have a pile of separate destinations to mix to, it's fairly straightforward.
The other advantage to mixing on a computer is that typically you can decide whether a send is an auxiliary or a submix. Basically that means you can decide whether each output is on a knob or a switch. Why you might decide to put something on a knob or a switch is up to you. But at least the option is open.
Nowadays one doesn't see many matrix sends on live sound boards. In essence, if you have a suitable number of aux sends, you don't need one. And I've been mixing on aux sends for a long time now, so I don't miss going from a submaster to a matrix.
Plus the other disadvantage to those huge analog boards was that in order to cram all those knobs into that little space the channel strips could become very difficult to read. Especially in low light. Is aux 7 on channel 42 set to pre- or post-fade? Who knows? Sometimes you could "lay hands" on the console and feel which knobs were "popped" up, in order to determine which ones were switched. But not all the time. It can be a pain.
Here's a fun fact. Dave Matthews actually uses a Digidesign Venue and gives the support act an EX56. Ha! If that isn't an endorsement for digital, I don't know what is.
at October 09, 2011