So. I got this idea in my head that I want a PreSonus Faderport. Because, you know, I'd like a fader.
Now I'm perfectly well aware that physical objects don't make a person happy. At least not usually. I'd say that I do get joy out of my guitars and my amps though. But a USB fader? That's absurd.
I found one on Craig's List. Eighty bucks. That's a pretty reasonable price (I've been looking at them on EBay so I have an idea of how much they're going for used. I know they're only $130 new. 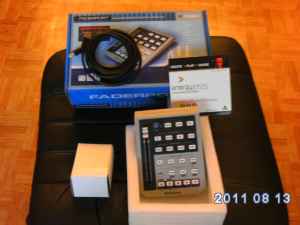 I call the guy.
He's in the Bronx. "Is it in good shape?" I ask (that's due diligence, right?)
"It's brand new."
OK then. Well, I should ask a follow-up question. "Did you just not like it?"
"It's my brother's actually. And he and his crew just got sent to jail so he's not going to be using it for a while."
That's not sketchy, right? I'm doing his brother a favor -- buying something that'll be way out of date by the time he gets out of prison. Right?
So I'll meet the guy at the 183rd stop on the 4 train tomorrow afternoon.
I'll tell you how that goes.
at October 23, 2011