News from the Mouse 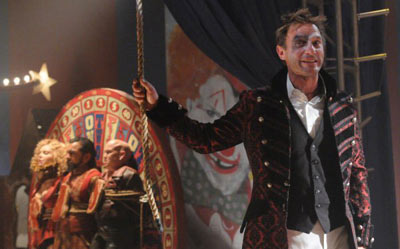 Still collecting images of jackets, because after all my band needs their own jackets. This is from the TV show "The Cape".

Lily and Greg of the City Samanas stopped by last week. It was a fascinating experience because Lily was interested in hearing new bass amps. At first I was thinking "well I don't have a bass amp" but then I realized that of course my Celtic Amps Edana is a Marshall JTM-45 clone. And the JTM-45 is basically the same circuit as the '59 Fender Bassman.

So I do have a bass amp.

And man, did it sound nice. Yeah, bass through what is traditionally a guitar amp. Now it was certainly true that the bass sounded much better in the "normal" channel than through the "high treble" channel. But boy it sounded nice.

Problem was, Greg's guitar also sounds awesome through the Edana. We're wondering if maybe they just got one amp and shared it...

I find it educational to hear other people play through my rig. My Lil' Dawg Mutt has an awesome compressed sound and breaks up early. Early but it a very nice way. And combining the sound of both amps just creates this huge organic and "three dimensional" sound which can't be beat.

I'm still cleaning up vocal tracks. Sometimes just fixing one or two notes makes an entire phrase sound much better. With the cleaned up notes the whole performance seems like it was intentional. Which (ha!) is about as good as we're going to get.

We forgot a couple keyboard lines last time Arie was here. We're going to fix that. I may be done with guitar parts. We just need to figure how we're going to mix this record. I've been pre-mixing it a lot and I'm getting better at mixing the band, but I just know if we go to Trax East the mix will be vastly better than anything I can do here at my studio and with Eric mixing everything will instantly sit right.
at January 30, 2011