So What Am I Doing? 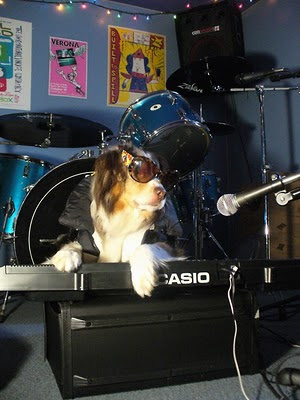 It might seem from this blog that all I'm doing T-mouse-wise is shopping for clothes. It's not true. Every morning I go into my studio and try to sing to a couple of the songs we've recorded.
One issue is that these songs we recorded almost without exception never did have words or vocal melodies put to them. We just played them as instrumentals and figured we'd come up with lyrics and melodies later. One song had a melody with no words. Two songs had both melodies AND words (which really makes them stand out, let me tell ya) and at least two songs had neither melodies or words.
So I'm trying to rectify that. In a song which used to have the name "Thing in A" and now seems to be called "Ice Maiden" I'm having some trouble because I very stupidly decided to do something weird with the phrasing. Well, the phrasing is interesting but it's very difficult to get from the verse to the chorus. And whose fault is that? Oh. I guess it's my fault.
Via.
at October 14, 2010