All my life I've been unhappy with the D chord on a guitar. I'm talking about the chord that's the first one you learn, the one that's a triangle of fingers with an open D string. You know the one.
Thing is, that chord is always out of tune.
Enough so that on recordings sometimes I'll tune the guitar just for the D chord and then punch in on the chord where I need it. Which is, you know, not optimal. I just want the chord to sound in tune. (The other chord which consistently bugs me is an Eb major as a double-barre.)
The problem is that guitars have frets. And the frets are all an equal distance from the nut and the bridge. But the strings are different sizes. And therefore the neck of the guitar is just an average of in-tune-ness. [And that's in relationship even-temperment, which is as good as we could ever pray to get on a guitar.]
So I got my Gibson SG and it sounds great but I didn't like the intonation and I decided it was time to put an Earvana compensated nut on it. I'm too much a fraidy cat to pop the nut off my own guitar so I took it to Matt at 30th Street Guitars here in NYC and had him install the nut and set up the guitar. As always, Matt did an amazing job of setup. (As a side note, he did a different thing to the nut of my Les Paul -- putting a little piece of bone on the G string, which sounds really dirty but really helps with the intonation.)
The installation and setup was $110, more than worth it. The guitar came new with a pretty darn good setup but it's even better now. 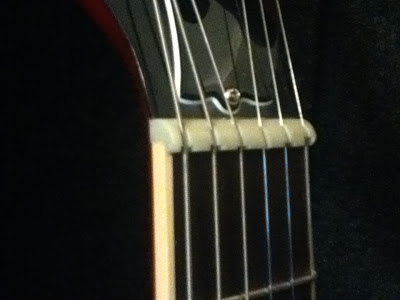 A note on the recording: the SG was plugged directly into my Lil' Dawg Amp "Mutt", which then fed a 12" Celestion Alnico Blue. The microphone was an AKG C12a (backed off a couple feet because it really couldn't take the guitar amp levels and I wouldn't have used it except that all my other mics are away right now because of the session we did the other night) into a Neve 1272 preamp and an Apogee Mini-me converter. There is only the slightest bit of compression on the 2-mix buss and other than that there are no effects.
My conclusion?
I've been waiting for this freaking thing my entire life. Yes, it sounds vastly better. The nuts are only $35 for crying out loud.
This is not entirely a proper A/B test (because I was not as careful about the tuning as I was with the Earvana test and there is some delay on the guitar so it's an unfair test) but here's the same guitar from before the installation of the Earvana:

Yeah, this makes a big difference. I don't really know why there's such a prejudice against these nuts. I mean, everybody should use them. That's my take away.
Will I replace the nut on my Les Paul (even though it's been specially modified?) Yes, eventually. Will I replace the nut on my Blattocaster which has the specially made bone nut that Ethan made? Um. Yy... yes. Eventually. (I mean, it's really cool that Ethan cut that himself and installed it and it sounds great it's just that... yeah...)
So that's where I'm at with the Earvana nut.
at November 23, 2012

Email ThisBlogThis!Share to TwitterShare to FacebookShare to Pinterest
Labels: guitars