Report from the Front

I'm on an adventure to find out how to record a rock band using the stuff I'm using. 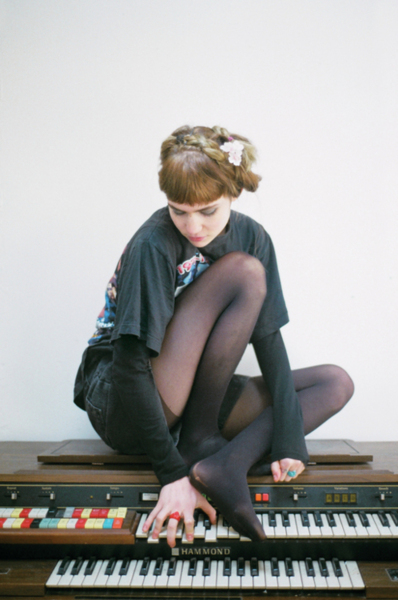 Part of this adventure is to successfully record a rock drum kit with three microphones. The big issue I have is keeping the sound of other instruments out of those drum kit microphones. The City Samanas are a four-piece (two guitars, bass, and drums) and that offers a lot of opportunity for other sounds to get into the drum mics because we all record together in the same (small) room.
The two things we're doing in order to keep those sounds out of the drum microphones so far are:

The headphone system we're using is the JamHub "bedroom". We have one remote for the drummer. Separate headphone mixes are available for each of us.
Recording the bass via a direct injection system rather than through an amp is interesting for Samanas.
Firstly, our favorite bass amps so far have been my JTM-45 clone (with an Alnico Blue 12" speaker) and a Fender Twin Reverb.
The reason we like them is because they've given us a sound which seems full-range in that there isn't that "separation" one frequently hears where the lower midrange, between the actual low-end tone of the bass and the "slappy" sound of the strings, is scooped out.
So we've been experimenting with the sound of bass going direct into a mic preamp. For most of our last rehearsal we were trying a Mesa Boogie Walkabout -- using the balanced "DI" output from the amp to feed a Lindell mic preamp. That hasn't quite yet given us the sound we're looking for.
Then we tried injecting the bass directly into a Neve 1272 high impedance input (the Neves I have are Brent Averill 1272's so they have 1/4" direct inputs). That sounded better but still wasn't quite what we (and by "we" I primarily mean the bassist) were looking for. But it was better.

Lily is going for a broad-range "lyrical" (my words, not hers) bass sound. In discussing with Ethan I came to realize a couple things:
Regular preamps with direct outs typically have cheaper electronics in their DI outputs. A bass head is made to drive a speaker and the line-level direct injection outputs are typically an afterthought. For this reason it is typically better to use a DI box like a Countryman or what-have-you. Side note, I don't even think I own a DI box anymore.
Now as a side note (because this blog post isn't long enough) I'll admit to being prejudiced 'gainst active electronics in all guitars -- including bass guitars. Ethan, however, pointed out that in all Tyrannosaurus Mouse recordings the basses were active. So my prejudice is not legitimate.

I am still convinced that the coloration of the tone using an amusing bass preamp will serve us well. And, as it turns out, Greg actually owns an SMS tube preamp. This is essentially a kind of mid-60's Twin Reverb preamp. Serendipity, no?

Do you have a lot of time on your hands? You can listen to our entire rehearsal (don't do this). Click through:
I'm sort of interested in simply plugging it directly into an M-Audio 2626 high-impedance input (which I totally forgot that I had -- there's two of them actually). It'll be easy and straightforward.
at March 17, 2013