Remember back when I was pontificating on the differences in sample rates and bit depths? 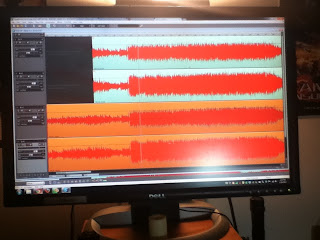 I've since given up. 48kHz and 16-bit is good enough for me. At least with Apogee converters they are. I've played The Great Gig in the Sky out of my iPod so many times now just to invert the polarity on different recordings and find I just don't care.
Actually, looking at the waveforms is interesting. Other than that, though, I just... don't care. My first reaction to hearing the 16-bit 48k recording was "Ooh, I like that one the best" before I realized which recording I was listening to.
I believe I'd already abandoned 24-bit as a recording bit depth when one has any sort of control over the input levels (recording classical music live and dialog for movies are not those times, so I'll still do those at 24-bit).
But I was still on the 96kHz Kool-Aid religion. I now forsake those high-sampling-rate gods. It's not that I believe those gods do not exist. I just do not believe they hold sway over the lands upon which I now live.
Excuse me while I set all my converters to 48kHz now. Oh look, now I can put signals over Lightpipe...
at January 26, 2013