I'm making a list of characters (who are doubled in some cases) in The Imaginary Opera.


You'll notice there's only one part for a woman. You'll also notice that "Bryant" is the odd-man out (as it were). His character is only in one scene and yet we can't even double him up. Maybe he'll just appear on a TV screen. There's some logic to that actually.
The part of the Chorus/Rachel/Priss/Zhora is amusingly difficult. She has to sing, dance, and act. And she's a world of quick changes. Right now I dig the idea that instead of her (as the Chorus) supporting the other characters, the other characters support her. They bring her props and they help with her changes. That might be fun.
One thing we haven't established as well as we should is the notion of the palm-flower. I realize that might be "one too many things" but as a ticking clock in the palm of your hand it pleases Us greatly.
I also do a crap job of killing both Batty and Zhora. I have to go re-work those parts of the script. 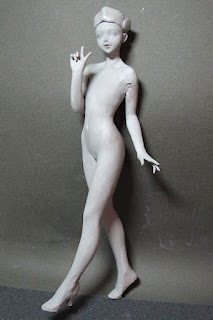 Then there's the issue of the music. There are actually fairly few songs in the piece. I think we have most of the themes or at least the rhythm guitar parts worked out. Or at least notionalized. I'll know more in a week.
Lastly, wiring for guitar amps.