I have numerous strategies to protect my hearing. The most egregious violator of people's hearing in this town is the damnable subway.
I've stopped pulling out sound pressure level meters on the subway but it flips my fellow passengers out to no end — I presume because they think it's a Geiger counter (or worse). No, it's just the astonishing assault on your hearing that I'm measuring, ma'am.
So I wear earplugs on the subway. For years I wore these custom-made molds which I got at an AES show sometime way back.
These things cut out quite a bit of sound. Brakes squeeling is one of my least favorite of the sounds a train makes and these do a pretty good job cutting them out.
If I smile or eat or suck on a straw; the seal on my ear degrades due to the "new shape" my ears take on when doing those activities. And the earplugs are defeated. So don't say anything funny.
You'll note that these rubbery earplugs are getting long in the tooth. Specifically portions of them are flaking off. I do not feel I have an endless time left with these earplugs with their current structural integrity.
At Ethan's request I became a man who has Etymotics ER-15 earplugs. 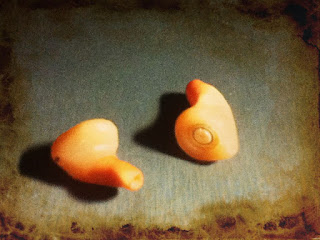 Again, custom molded, these are musician's earplugs. When you first put them on and go down into the subway you're all like "Are these really working?" Because you can hear people talking — just 15dB quieter than you'd think they'd be.
I prefer the top molds on regular train rides just because sometimes 15dB ain't enough and you want that 20dB or so of protection from whatever nonsense is going on down there in the tunnels (my favorite is when a crew on the platform is just cutting through steel plate with a circular saw).
But then I was all worried about hearing quiet things I need to hear and yet still have protection 'gainst the loud trains. 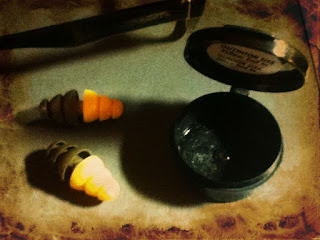 So I got these Peltor "combat arms" earplugs. The idea is that they're straight-up 20dB (green side in) but the beige side in has a kind of mechanical cut-off so that loud sounds will be reduced.
The beige side doesn't work for me. I don't know where it kicks in but it certainly ain't 85dB SPL A-weighted. And I'd really like it to be.
But the green sides are frequently more comfy than my custom molds — if for no other reason than they're softer. So I've been using the Peltor (green side in) on the subway although I would really like a passive limiter at about 85dB SPL.
Such may come, in a dorkier package.