So I've had this idea, after seeing the Turangaleela at the New York Philharmonic earlier this year and also having seen the Kachanov Singers, that the orchestral bass drum is actually the most expressive drum there is.
And honestly I'm not getting a lot of push-back from drummers on this idea. The drum can be quiet and round. It can make delightful little "canks." It can be muted, it can be resonant, it can be sharp, it can be LOUD. I mean freaking LOUD.

And if you're going to have a concert bass drum, it should be 40" by 20" deep.
Thing is, they cost around $2700.  Also note, though, one of the big tricks is that those come with a sweet stand which completely suspends the drum and lets you tilt it at any angle you want. Which kind of rocks.
But let's experiment with the mind for a while, shall we? Mind. Experiment.

There are some resources on the interwebs for building one's own drums. Thing is the pre-built easily-available drum shells don't get as big as 40".
But there's another way -- building a drum with staves instead of a bent shell.

Stave calculator by Uniontown Labs. It's cool but it doesn't actually go up to 40". And you know you need a 40-inch concert bass drum. But still, it does a lot of the calculations (even if there's a seeming limit in the numbers somewhere which make it output "infinity" in some fields.)

But. Again. Decimal inches? I ain't got time for that. I mean unless we really started making decimal inch rules. Which. I mean I guess I have to be able to find one. But. Ugh. Millimeters. I'd so prefer to work in millimeters. 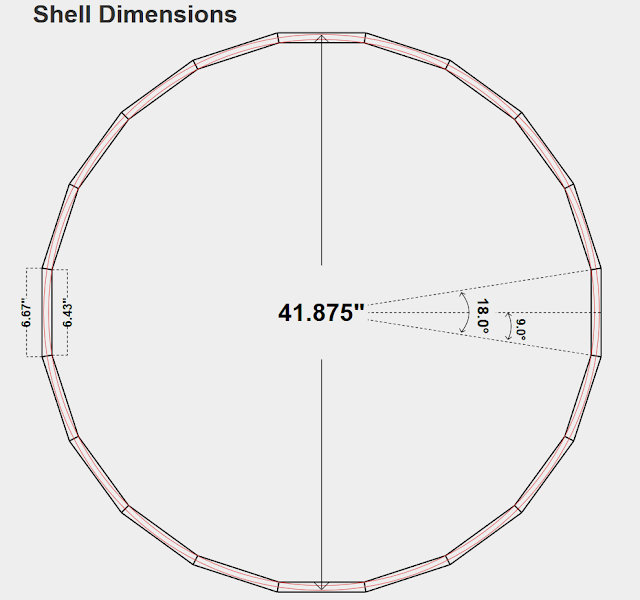